Top Cryptocurrency Ponzi Scams as of 2020

What is a Ponzi Scheme?

A ponzi scheme is a fraud in which early investors are lured with massive payouts based on how many people they invite into a business that is designed to cheat people.  You may have heard this many times before where certain schemes encourage you to invite 3 other investors promising a cut from their investments, generally considered a pyramid scheme (Multi-Level Marketing, MLM more technically).

services backed by the company.

Ponzi schemes and Pyramid schemes that are designed to fraud people are what cause heartache to many unassuming investors.

Luring people into such frauds has been much easier in crypto as the concept of digital currencies and technology is still in its early stages and very few have the knowledge of how it all works.

According to Chainalysis, Ponzi Schemes account for 92% of all scams in Crypto. And almost $4.3 Billion was lost in scams, ponzies and fake token sales. 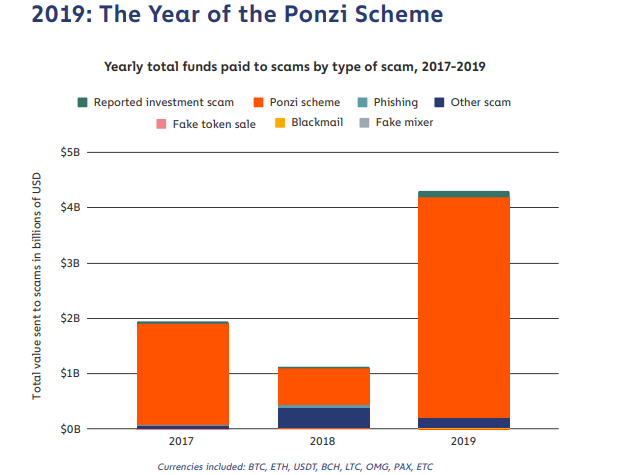 Today we will look into some of the biggest ponzi schemes in the crypto market so far.

One of the biggest Ponzi Schemes in Crypto by far which scammed $4 Billion from the investors. OneCoin was based in Bulgaria, led by Ruja Ignatova and Sebastian Greenwood.

Onecoin was advertised as the bitcoin killer and other crazy sales pitches which lured thousands of investors into it.  They even had grandiose events inviting the big wigs from the blockchain and crypto space which added much more ‘authenticity’ to their project.  There are many rumors about Ruja as being dead or having changed her appearance or having bought the corrupt authorities to hide her identity and many more. With Billions in disposable income, anything is possible.

PlusToken, another Billion dollar crypto ponzi scheme based out of China, which promised huge returns to its investors.

The project closed down exactly a year ago in June 2019 running away with $3 billion worth of Cryptocurrencies.

BLOCKTV’s Yonah Hochhauser reports on the PlusToken Ponzi Scheme, and how their offloading of funds is crashing the crypto market. ————– For more fi…

Later it dumped over 200K Bitcoin selling them Over The Counter(OTC) which was assumed to be one of the reasons for bitcoin price fall earlier this year during the March 2020 dump.

Started in 2016, Bitconnect was a ponzi scheme that earned trust of thousands of crypto investors at the time and even ranked at the top spot with a $2.5 Billion Market Cap on CMC.

The investors of Bitconnect were strongly rooted in this project and many invested went out of their way to liquidate their assets to invest in Bitconnect.  Some even sold their homes or took loans against their homes to invest.

People like Charlie Lee and Vitalik kept warning people to stay away from this project.  Their advice unfortunately fell on deaf ears.

Carlos Matos from new york speaking at a bitconnect event, which is trying to explain that the cryptocurrency is not a scam and legit. here are some of the f…

This project closed its operations and was assumed to have lost its investors a staggering $2.6 Billion dollars.

Bitconnect took down a lot of YouTube influencers who shilled the project to its viewers with it.  Craig Grant, Trevon James and Crypto Nick were some of the top names that faced harsh criticism (not to mention legal repercussions and threats) post bitconnect scam.

Started in 2014, Bitclub Network invited investments from the people in exchange of the shares of the company and even paid them incentives for getting new investors enrolled.

In December 2019, Matthew Brent Goettsche(37), Jobadiah Sinclair Weeks(38), and Joseph Frank Abel(49), were arrested for scamming their investors in the amount of $722 Million.

This is considered to be one of the biggest crypto scams to ever take place in India.  GainBitcoin lured over 8000 investors to deposit their Bitcoins into their pool in the hopes of high returns.

The spearhead of GainBitcoin, Amit Bhardwaj, was arrested along with eight others in March 2018.  The scam was supposed to be worth anywhere between $300 Million to $5 Billion depending on the value of Bitcoin at the time of deposit (which varies significantly because deposits were all made at different times).

People caught up with the Vitalik Buterin giveaways so the scammers got more creative. They started using Elon Musk, Brian Armstrong, etc., for crypto giveaway scams that promise 10:1 return to lure gullible investors.

Many new investors fell into greed and lost their money. Just one giveaway scam looted over $2 million, you can imagine what all of them put together might have raked.

Scammers are using all types of social media networks but prominently YouTube, Facebook and Twitter.  They are hacking popular YouTube channels, deleting the existing videos and replacing them with ‘fake live streams’ of crypto giveaways.

5000 BTC Giveaway by Elon Musk | Get Yours Now (Check description)

✅ For Giveaway: https://musk-live.com/ Elon Reeve Musk FRS is an engineer, industrial designer, technology entrepreneur and philanthropist. He is a citizen o…

Telegram has also been a popular locale for these scammers.

We personally reported such an incident with the fake Ren Community and fake Factom Group created by the imposters.

Quick lessons from the scams:

Thank you for reading and sharing this article. We appreciate you.

Don’t forget to subscribe to receive ONE email per week with critical blockchain and crypto updates and occasional freebies. Check all the amazing stuff our subscribers get for FREE.

All product and company names are trademarks™ or registered® trademarks of their respective holders. Use of them does not imply any affiliation with or endorsement by them.

Get ‘Week in Crypto’ news updates in ONE email.
We never spam your inbox and we only send one email per week
with updates, news, eBooks, tax updates, and more!
Get knowledge, not spam!  Subscribe here.